What is a “CUT-DOWN” Duck Call?

A CUT-DOWN duck call is a duck call that has been modified and the tone board cut or reshaped from its original design. This provides more realism and variety to your calling. It provides a very effective sound and gives you an edge over the hunters around you. The CUT-DOWN has evolved dramatically and become the call to hunt with. The CUT-DOWN is the most effective duck call on the market, from a public land duck hunter’s standpoint, the CUT-DOWN is the only call to use because it has a significant proven track record of bringing mallards to the decoys consistently. I’ve hunted with a CUT-DOWN most of my life and don’t duck hunt with any other type call; I have to be confident with my call, I can honestly say I’ve never used another call more effective than a CUT-DOWN.

When I started developing these calls back in 2011, I spent 15 years thinking about it. I looked at every call that’s ever been made that was a worthy call for the woods, and I studied each one of them and found the flaws in all of them. So, my goal became to build a duck call that doesn’t have any of those flaws. When you buy, it will be the only call you need. So, if I take it to the woods and it doesn’t perform the way I think it should, it doesn’t go into production and I don’t sell it. ALL the calls I sell here pass that test.

We have seen the keyhole trend, but I don’t specialize in only keyhole calls. My KM OUTLAW fits a selection of my inserts, four of which are versions of the keyhole and one, my MC-50 cut down duck call insert, which is a multi-channel hole and has a thunderous, raspy sound with excellent quality. If it didn’t work, I wouldn’t sell it. 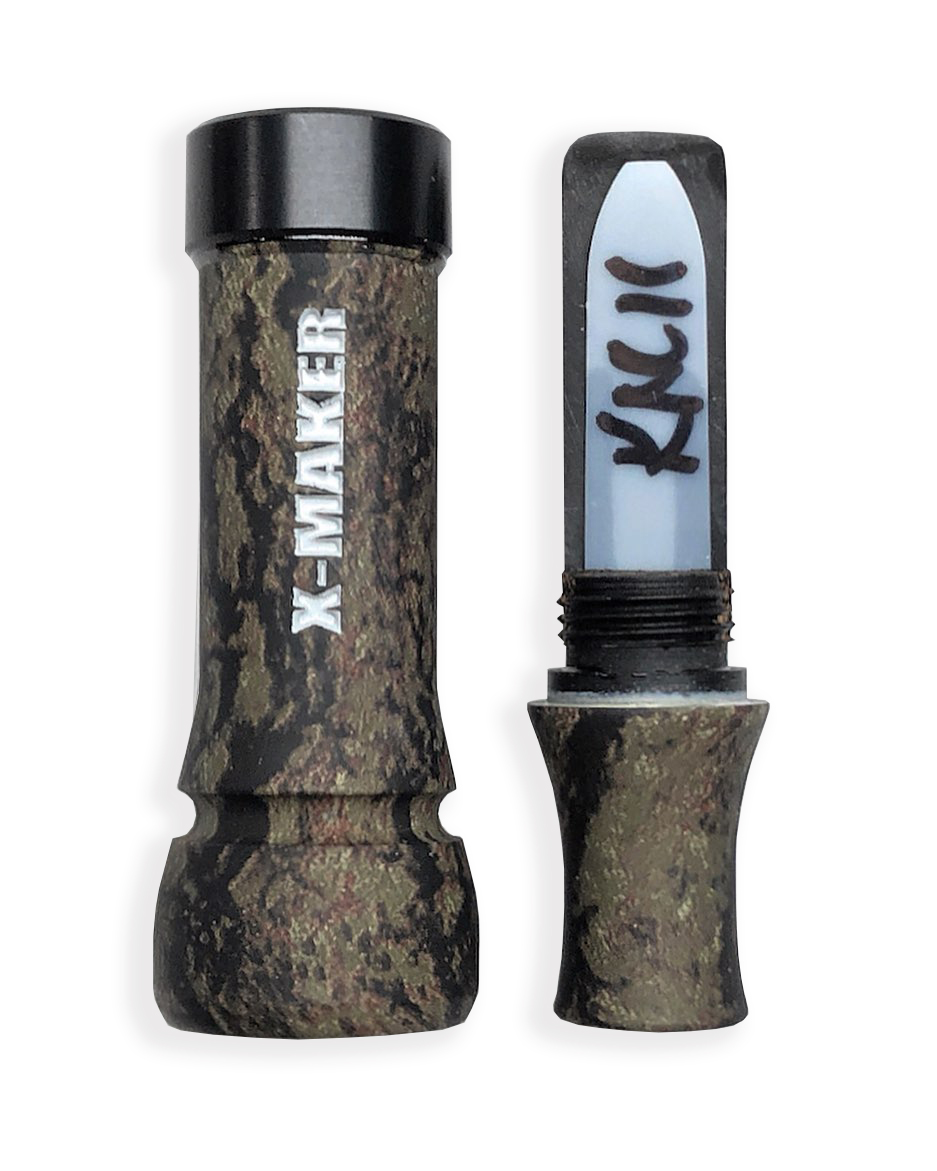 Hear the X-Maker cut down duck call in flooded timber.

Hear the X-Maker XLT and what makes it special.

In It for the Blood: Lawless

Living for the Kill

The Sky’s the Limit

About Kirk McCullough and Cut Down Duck Calls 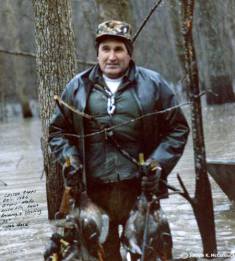 Some people seem to think that ducks respond much better to a CUT-DOWN type duck call. I started using a CUT-DOWN D2 Olt New Style duck call in 1982. I hunted with Lester Capps; he was using a cut down Keyhole Olt. The call sounded like a hen mallard & the ducks came to his call from every direction.

Steve Schultz and I went hunting one morning when we were very young. We got to our spot early and set out the decoys. When daylight broke there were a lot of ducks flying. We heard this unique sounding duck call in the distance, it sounded like many ducks and sounded real, followed by continuous volleys of gunfire and intense cripple shooting.

That day we did not kill a duck; we could not compete against the guys we were hearing. At the time, I was using a Hambone wooden duck call and Steve was using a wooden Richentone duck call. And we both considered ourselves good callers but found we were no match for our competitors.

Steve hunted with that group of hunters the next morning, later he called me and said what we were hearing was one duck call and the guy using it was Lester Capps. Lester worked on the same job as Steve and I at the White Bluff Power Plant in Redfield, Arkansas. Steve said he was using a backward keyhole Olt. Steve said he was working big groups of ducks, getting them through the trees and on the water. He said Lester had 18 people and they limited out by 10:00 am.

So, a friend of mine, Bruce Bond, a gunsmith at Jim’s trading post in Pine Bluff Arkansas, cut down an Olt call and brought it to me. I used the call, and it was instant success. I continued to use the call, practice and get more accustomed to using the CUT-DOWN style call, it took quite a bit of air but the extra effort was certainly worth it. And I’ve exclusively used cut-downs since that day almost 40 years ago. 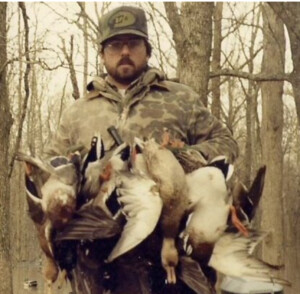 Myself in the early days of using the cut-down Olt in flooded timber.

I continued to use the Olt D2 New Style duck call Bruce cut. After Bruce died from couple years later, I cut an OS D2 Keyhole model duck call and starting using that call. The sound was more realistic, the chatter was sharp, the volume was much louder than a round hole new style D2.

I began guiding duck hunters in the public timber of Arkansas in 1981.

Since I used my CUT-DOWN style duck call every day and became more accustomed to using it, I became very effective with it and gave me an edge over other hunters around me.

My customers witnessed the results of the call and they wanted to buy one. So I began cutting calls for my customers, then my friends and then people began showing up at my camp to buy a CUT-DOWN Olt duck call.

I called Jim Olt, prepared a written agreement to buy Olt calls from him and modify them. And then I began modifying and cutting down Olt duck calls. I began modifying other calls, trying different cuts and making more precise modifications to the calls.

I developed my own call, the KM CUSTOM CUT keyhole duck call with a threaded barrel and threaded insert. The call is turned on a lathe, threaded and the insert is profiled with a keyhole insert. I modify the call further by reaming the mouthpiece, sloping the barrel’s inner portion, and inverting the keyway. I cut the tone board with 4 types of files, 3 grit sizes of sandpaper, this is done by hand. The result is a very smooth, crisp user-friendly CUT-DOWN keyhole duck call that is very loud. The call is a true fit, 0 tolerances, and the insert is secure.

I will be 62 years old in June of 2021, I still think about duck hunting obsessively, and I will duck hunt until the day I die. I won’t ever change my style of hunting. If I could change one thing, it would be the mindset of people who believe you have to be doing something illegal to be successful consistently.

How to Blow a Cut Down call and Duck Hunting tips

How to blow a cutdown duck call.

Customer provided duck calls that Kirk McCullough has Cut Down

Keyhole Olt that Kirk originally modified and came in for a tuneup.

Andrew Price’s Keyhole Olt. It’s a call that will do some damage.